The Rites of Spring 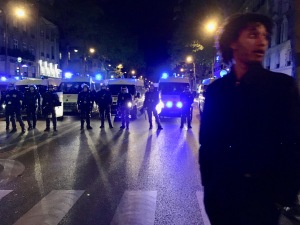 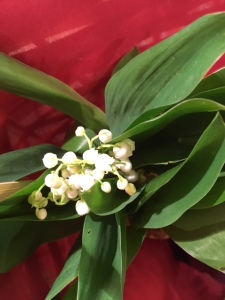 In France, the first day of May marries two traditions that have absolutely nothing to do with each another: offering a bouquet of lilies of the valley to one’s nearest and dearest, and celebrating International Labor Day. The noisy parade routes, jammed with union members and sympathizers waving banners, are lined with sausage stands and makeshift tables selling the little bunches of sweet-smelling flowers, rather droopy after having traveled so far. The weather’s bound to be lovely. C’est la fête!

It wasn’t the weather that spoiled this year’s holiday party in Paris. May first dawned cold and gray but heated up rapidly along the route, Bastille to Place d’Italie, thanks to the shenanigans of the so-called Black Blocs : 1200 members showed up from this loosely organized movement of agitators and self-styled anarchists, wearing dark clothing and balaclavas, carrying bags of hammers and Molotov cocktails. The parade exploded into flames at the Place d’Austerlitz, where cars and businesses were smashed and burned. A MacDonald’s was set on fire, with customers trapped inside (no serious injuries reported).

Forty-two suspects are still under arrest. And the finger-pointing is in full swing. Where were the police? (Concerned about collateral damage; however, they eventually swung in with tear gas and water cannons.) The leader of the far left, Melanchon, declares the Black Blocs are actually ultra-right skinheads. The Chief of Police points out drily that it’s unlikely the unions would have invited ultra-rightists to join their parade. And where was the Mayor? The President?

Before the first of May, I planned to post again about the (mostly) wonderful plays I’ve been lucky to see this season in the city of 450 theaters. Before the first of May, I planned also to quote at length from an intriguing recent interview with Macron about his ‘relationship with literature’, and such writers as Proust, Camus and Stendhal. It included this gem: ‘What makes me optimistic is that history is again becoming tragic.’

In context, ‘tragic’ not as a calamity, but in the sense of what literature requires: that something vital has to be at stake. After the long post-war lull of security and prosperity, people everywhere are finding that crucial things are, right now, at stake.  The loss of culture(s). The degradation of public education – and of the planet. The have-nots versus the have-lesses. Religious extremism. The rights and needs of local populations versus the needs of those with nowhere but here to go.

Much is being made of the anniversary of May ’68. I don’t see many parallels, the destructive posturing of the Black Blocs aside (one symptom among many). The conflicts erupting today in Europe  – and elsewhere – run deeper and wider than students battling police, or debates about Marxism. Not to belittle the state violence of those times, or the importance of political-philosophical debate.

France is not alone in being increasingly anxious, impatient and divided.  There’s a time for reading and reflection, and a time to act. It won’t be easy, in a new landscape we are all only beginning to discern, having returned to a sense of the tragic.