Blocks of ice are crashing off my roof as I write. Did pdv really just leave New England for Paris, or was it all a dream?  To be snarkily honest, it is a bit hallucinatory to go from a town where two feet of snow merit a same-old-same-old shrug, where the municipal snow dumps rise many stories high and last through April, to one where three inches of the white stuff leave 2,000 motorists stranded overnight in shelters or on the N 118 highway. With snow now following on weeks of rain and flooding, Parisians are feeling badly treated by the weather. Except for those roughly age fifteen and under, who are having a blast slipping and sliding and pelting each other as well as collateral-damage pedestrians with snow-balls. Needless to say, for a large number of vociferous citizens and journalists it’s all the government’s fault. Voices are hollering for major investment in snow-dozers (costing millions a pop) for a meteorological event that occurs not even every year and then only for a few days. Yes, climate change and all that. But perhaps the populace should first shell out for snow shovels. There appears not to be a single shovel south of Lille. It’s touching, though, to watch the few civic-minded shopkeepers trying to clear their bits of sidewalk with brooms. 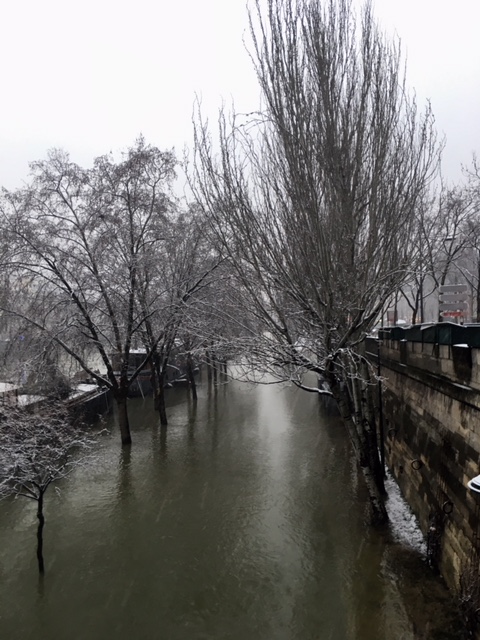 Macron was the hit speaker at Davos, giving a boost to national pride even among his critics, who were willing to say as much.

Macron has not exploited or bought women, nor (yet, pray never) been tarred by the #metoo brush, although Russian influencers launched all sorts of nasty fake stories during the last election (documented true fact.) And although only today heinous rumors are swirling around the most popular minister in his government, ecologist Nicolas Hulot. (M. Hulot has passionately declared his innocence.)

Macron went to Corsica to dedicate a square to the widow of a prefect gunned down by separatists twenty years ago. In his speech (and surely with thoughts on Catalonia) he refused to give in to separatist demands for further concessions. Most commentators predicted a violent backlash. However, a poll today shows two-thirds of Corsicans supporting Macron’s stance. Well, well! Nor does anyone expect him to change his mind. This President does not have a history of changing stated policy, however controversial.

Of course it’s not all about a President. And M. Macron, like France, is far, far from perfect. There’s plenty to complain about–just ask any Parisian.