Be Careful What You Envy

Only yesterday, wandering in a chilly Seine mist on the day of D. Trump’s press conference, PdV comtemplated a riff on ‘voter envy.’ As an American, how can one not envy the French electorate? By all accounts, they’ll face an embarrassment of riches next May, when a packed presidential field will be led by three experienced, upstanding candidates, each presenting a program that has distinct strengths.Francois Fillon, a conservative economic reformer noted for sober hard work and a Catholicism that comprises compassion, was the surprise sweepstakes winner of the LR (les Republicains) primary, stifling Sarkozy’s comeback hopes. The recent prime minister Manuel Valls, a bullish left-centrist, is favored to carry the tattered standard of the Socialists. (That said, no one bets a centime on the PS’s post-Hollande chances.) Emmanuel Macron, former minister of Economy and current leader of the movement En Marche, another economic reformer and rousing pro-European, is inspiring growing crowds. What could possibly go wrong?

Quick time out for the boring stuff:

French elections take place as two ‘rounds’ (tours). In the first, sort of a free-for-all, the electorate gets to let off steam; there is a degree of protest voting. Normally, round two comes down to the two leaders of round one. (Evidently, the combinations of possibilities can be prodigious. Was the system designed to hone France’s vaunted math superiority?) The round two choice can be hard: in 2002, in order to defeat Jean Marie LePen, the left held its collective nose and voted for Jacques Chirac, trading outright racism for years of stagnation.

Whew. Back to tomorrow. So what could possibly go wrong? Well, only this morning a new poll puts Marine LePen, Daddy’s girl of the far right, in solid first place coming out of the first round—ahead of Fillon. Ah, but not to worry—Fillon, according to the same poll, will take round two. So, nothing to worry about! Unless you recall with a shiver the polls that assured us of Clinton’s victory, whilst a certain beast lumbered toward Bethlehem.

News flash on the radio: Marine LePen is heading for New York, staying at Trump Towers. A DT spokesperson says there will not be a meeting. Also, I have a pineapple ranch in Alaska to sell you…

One of PdV’s favorite things in January… the fragrance of sharp-sweet balsam wafting from the Christmas tree cemeteries in the parks. 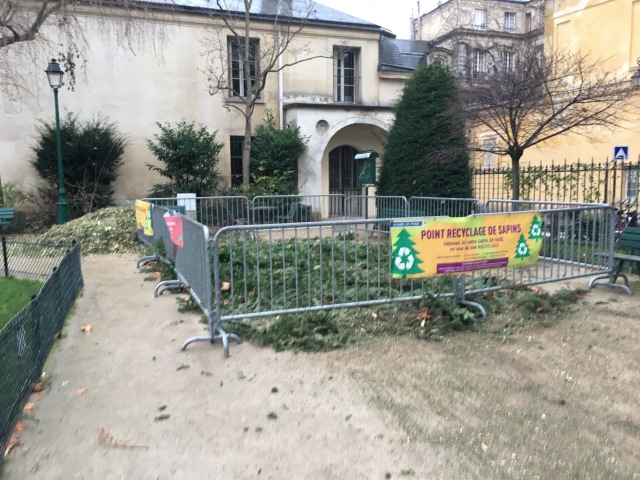 A note looking forward: PdV will take part the Paris Women’s March, on January 22. To be sure to receive the next report, Follow on the home page—it’s one click.

← Elections, What Else Is There?!
Polling the Titanic →