An Angry Shade of Blue in France’s (Real) Great Debate 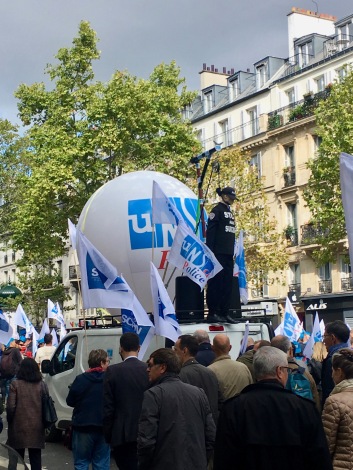 Last year, reacting to the escalating turmoil of the Gilets Jaunes movement, Emmanuel Macron launched a campaign of Great Debates – country-spanning town meetings, if you will, led personally by the ‘who needs sleep?’ President. These were billed as invitations to the forgotten, especially those outside urban areas, to voice their ire and perhaps propose solutions to grievances – such as taxes, retirement, the impoverishment of farmers – that essentially boil down to questions of how to redistribute wealth. For all the snarking (He talks too much! It’s a smokescreen!) the exercise has colored current policy, and, some say, Macron’s own outlook.

But that ambitious attempt to restore commonality (really, can anyone imagine the current US President, or British PM, hunkering down in schoolrooms for hours to talk policy with the disgruntled and despairing?) was only the tip of an underlying Greater Debate: the Question of French National Identity. Long since serious fodder for stand-up comics, it’s been gaining urgency. Like the Gilet Jaune movement, the identity crisis is quickened by angst over the rate of immigration and the failures of assimilation, fears turbo-charged by terrorist attacks and fundamentalist ‘Islamism.’ Hard for many people not to discern a symbol, or something more, in the horrific burning down of Notre Dame. In bookstores, the self-help prescriptions have been pushed aside by warring definitions of what-it-is-to-be-French, with titles like ‘The Romance of France”, “French Destiny” and – on the bestseller list this month, by Sonia Mabrouk – “Dear France, Have You Totally Lost Your Mind?” [My title translations.]

While argument over the nation’s essence can’t be reduced to a simple left vs right polarity, that almost tribal element plays a part in most French debates. Are we an open and permeable society, borne on and ever reshaped by the oceanic currents of history? Or is History – our heroes and geniuses, wars and losses – that which defines us, without which we’d be a disintegrating body without a head, a random place without memory? Should our taxes pay for mosques, or ‘de-radicalization’, or deportation? The revered De Gaulle, whose presumptive heir Jacques Chirac was just laid to rest with enormous pomp and circumstance, referred to this as “a country of the white race, of Christian religion and Greco-Roman culture.” If those words make a lot of people wince today, for others, including, I’ll venture, many Gilets Jaunes, they are the seldom-spoken truth. And while we’re on the subject, who gets to write the nation’s history, going back to the legends of Vercingetorix, glorified in comic books? As Orwell wrote in 1984: “whoever controls the past, controls the future.” No small lever.

Two days ago I was strolling beside the Seine, starting to write this entry in my head, when a police cordon blocked my way. The Ile de la Cité was being evacuated. Why? No answers from the nervous and peremptory ‘flics’, who hustled us on. A helicopter flew low overhead. The man next to me remarked, ‘It’s an exercise. They do them all the time.’ Awfully elaborate exercise, I thought.

Only the day before, an estimated 27,000 keepers of the peace from all corners of France had marched in disciplined protest from the Bastille to the Republique. One felt deeply sympathetic: 52 French police officers have committed suicide since the start of 2019. In addition to worries over upcoming changes in retirement benefits, the main intolerable pressure cited was extreme, underpaid overtime duty due to the Gilet Jaune demonstrations, and acute frustration over the leniency of revolving-door courts, especially when extremists, including suspected ‘Islamists’, are under arrest.

One officer, divorced, said he had missed his custodial every-other-weekend with his young son seven times in a row. Another pointed at the loss of authority. “In some areas, everyone knows that it’s become impossible to intervene without starting a small riot… they shoot at the police with mortar rounds, and aim to kill…”

One of the quotidian comforts of Paris is the continued and in fact flourishing existence of newsstands (circa 360!). Who would know better what’s going on in real time than the nearest news vendor, given that she/he is in constant contact with the public? So I bought a paper, and was told, “A client told me there’s been an attack. In the Prefecture. With a knife.” “Was anyone hurt?” “Maybe four.” “How could a knife get past security?” “Ceramic, I suppose.” “Thanks for the tip!” I said. Flippant. It all seemed unreal. It’s always unreal at first. “It was an Arab did it.” “How do you know that?” “Have you ever lived in the cité?” (‘Cité’ refers to the low-income, high-rise, desolate suburbs of Paris.) “Honestly, no.” “Well I have. And I can tell you, there were 28 different groups living there fine, and all the trouble came from only one. Muslim gangs.” “Still,” I said, “we don’t know. We need to keep our minds open, don’t we?”

Some hours later the news became official. Four people murdered – with a ceramic knife. One in critical condition. But if there was anything positive to cling to, it was that apparently a bout of sudden madness was to blame. A sole long-term employee had gone berserk, out of jealousy or romantic rejection. Nothing to do with race, nationality, or religion, let alone conspiracy.

Until today. It now appears that the assassin converted some time ago to Islam, and  more recently became a devout Salafist. In the night before the attack a neighbor claims to have been wakened by his shouts of ‘Allah Akbar!’ The case has now been taken over by the elite national terrorism prosecution bureau.

There will be those for whom the Prefecture murderer remains an individual tragedy of temporary insanity, to be treated with a degree of societal compassion. But I doubt that many in the police feel that way. I doubt that many middle class and working class people will feel that way. And so the circle draws a notch tighter around the question of national identity. What do we share and believe in? History? Whose history? Values? Whose values? Do art and literature offer a foundation? The climate-endangered landscapes? Or are food and wine all that’s left? In 2019, what does it mean, if anything, to be French?

TO END ON A BRIGHTER NOTE…

Life won’t take ‘no’ for an answer, and there was certainly nothing blue about last night’s Nuit Blanche (white night) Paris’s annual open air celebration of all the arts, including the art of celebration itself. Concerts, street dances and lessons, light and sculpture installations, open studios and invitations to try one’s own hand, and a ten kilometer run for the fittest culture vultures, a sort of touch-tag around the great museums and monuments, etc. etc…  No one could possibly do it all, but it did seem as though, even past midnight, everyone was still out trying.

I took cover in the modest and lovely, moss-covered ‘cathédrale Sainte-Croix-Saint-Jean-des-Arméniens’ for a concert of Mozart, Berlioz, Scriabin and Stravinsky. A full orchestra of professionals had banded together for the occasion, with a mezzo-soprano and piano soloist, and a wonderfully intense and dedicated conductor who offered the closing piece, Stravinsky’s ‘Norwegian Moods’ twice! They were understandably proud to revive a score that has been played only once before in Paris, in the same hall where Le Sacre de Printemps caused its famous scandal – only, that second time around, to have the young, avant-garde audience boo the composer again, for not being, well, Stravinskian enough!?

The ticket price of last night’s concert was an affordable zero, so no one would be left out. Most of the audience made a donation. That said, the sense of shared musical emotion and camaraderie was, of course, beyond anyone’s ability to pay.