How Will the World Spell Europe?

Starting Next Month, How Will the World Spell Europe?

For folks living on other continents, or in the farther eastern reaches of this vast Eurasian land mass, the upcoming EU elections may look as compelling as a snail race and as comprehensible as a long-form tax return. Won’t Europe hang together anyway, now that Brexit has scared sober so many former separatists? Doesn’t it all merely come down to changing the guard of too many overpaid bureaucrats in Brussels?

Above all, in most of the EU’s twenty-eight member countries, and certainly in France, the differences between umpteen rival party lists boil down to two incompatible visions for Europe’s future vis-a-vis the world. Scenario A: a Europe that continues on the current obstacle-strewn course of greater integration and cohesion, with reforms and improvements. (Example of cohesion: the recent agreement between France and Germany to co-develop planes and weapons.) In France, this is the program of President Macron’s LREM and its allies. Scenario B: re-write the treaties toward a more republican organization of states, leaving much more autonomy with individual countries. Think unequal wage levels, social safety nets, and reproductive rights, and, above all, nationalized border security. In other words, imagine Europe with a capital E on one hand, and europe with a small E on the other.

Add to this the continued Brexit-envy of far-right ‘B’ camp parties set on starving the alliance. A negligible force? Hardly. On Saturday in Milan, Matteo Salvini, Europe’s new strongman, hosted a street party for thousands (the supporting pop artists included Andrea Bocelli, fyi) standing beside his guest of honor Marine Le Pen. Persons-in-the street spoke of fearing to leave their homes because of violent migrants, and that Europe was being ruled by ‘Illuminati.’ Matteo’s goal is to unite all Europe’s so-called populists, including Germany’s ultra-right AfD. Austria’s ruling right was in the bag, too, until the scandal that just broke over Russian money having been stuffed into its campaign chest. Oh – did someone say ‘meddling’? Bonjour Steve Bannon, arrived this weekend in Paris to throw your support to le Pen, terming the French vote “the most important.” The helpless LREM can only denounce your “attack on the sovereignty of the elections.”

Bannon the Wall-Builder knows as well as any European that the elephant in the electoral booth, the ultimate motivator of the opposing visions, remains Africa, north and south. Will the specter of uncontrollable migration splinter the EU back into 28 more or less economically and militarily irrelevant, powerless pieces? It’s the international balance of power at stake.

But here in France spring has arrived at long last, the cafés and parks are spilling over, and most citizens have yet to muster much enthusiasm for next Sunday’s contest, let alone do some homework. Yesterday I asked a friend of the ‘professional class’ (an MD married to a banker, two grown daughters) for her opinion. The good news is, she plans to vote – though the daughters don’t seem into it. She then cheerfully acknowledged having no clue as to the main parties’ programs, and in fact couldn’t remember the name of Sarkozy’s once reigning UMP. (Nb, they are now Les Republicains, still fighting the pull of the political drain.)

So much for anecdote. Here, a few numbers: expected voter participation in Europe? Around 43% with France smack in the middle at 43.5%. (By US standards not so shameful, but.) The current front runner by a nose? Marine Le Pen’s renamed RN (National Rally), aka deep Scenario B, led by a twenty-three year old shooting star. If Macron’s party loses this one – and just to muddle matters, over 40% of the above say they are treating this election simply as a referendum on his performance to date – he will have only himself to thank, having picked a technocratic head-of-list with all the rallying charisma of a cold crepe. And if the LREM does lose? The recently thinned-out ranks of Yellow Vests, seeing in the result a vindication of their movement, may come roaring back into the streets.

Since when has blanket opposition become so much more attractive in democracies than, well, the work of thinking things through?

Warm winds and birdsong and blue skies are all very nice, but nothing says ‘spring’ in Paris like kids let out to play – and adults strolling through street upon street of flea markets. 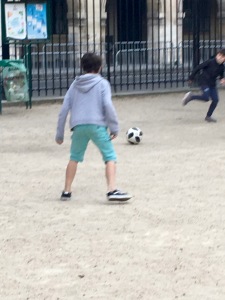 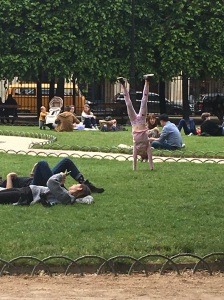 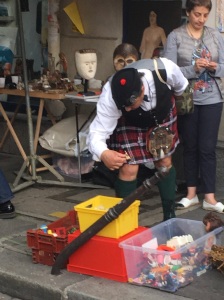 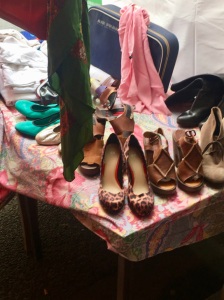 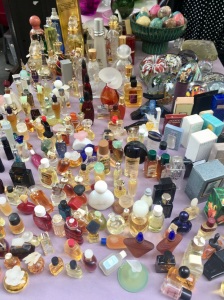 ← Up for judgment: Macron’s Great Debate, and the ‘re-looking’ of the Champs Elysees.
Reading the Results – A Bulletin in Bullet Points on Europe →