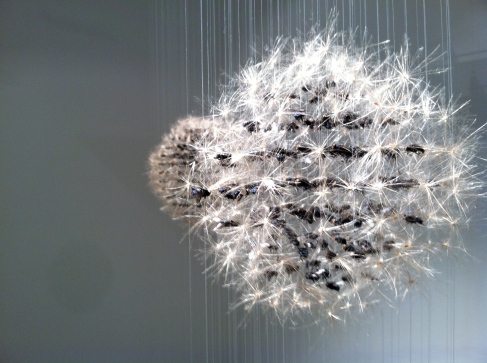 The FIAC is over.  Vive la FIAC!

The Foire Internationale de l’Art Contemporain, October 24-27, brightened our town’s mood considerably, if briefly. Past FIACs have had a certain tacky quality, but 2012 far outshone its predecessors in both variety and quality.  The Marais pullulated on open gallery night.  Clusters of black-clad cognoscenti surged in and out of the brightly lit temples like so many greedy trick-or-treaters.  It was a long night’s feast, what with the bigger galleries devoting lavish space to major works by, e.g., Joseph Beuys, Sophie Calle and Susumu Shingu.  Meanwhile, temporary venues sprang up around town in halls and warehouses, housing off-off-FIAC artists who didn’t or didn’t want to make the official cut.  And XXL-size sculptures  and installations were scattered through the city like clues, e.g. in the Jardin des Plantes, les Tuileries and Place Vendome.  A FIAC fan wants sturdy walking shoes and stamina.

The main venue of 184 gallery stands showing over 2000 artists in the Grand Palais was too thronged, chaotic and vast to take in on one day/ticket.   Everyday Parisians in cloth coats bumped shoulders with exotic fauna in alligator and sable, buyers at least as outré and eye-grabbing as the oeuvres they pursue.   Just when one was fed up with the usual silly cries for attention and visual jokes (perhaps the classics of fifty years from now but I doubt it) such as a dismembered sofa, or period portraits embellished with clown noses, or Plexiglas skulls in pink and orange displayed in two rival galleries, like stars at the Academy Awards wearing the same dresses–something brilliant or haunting would happen. Dhervillers ‘Priest’ agglomeration.  The fey porcelains of Klara Kristova.  Claire Morgan’s hanging feather globes.   (Feathers, by the way, are absolutely the in medium these days.)  It’s all about the lure of the unexpected and the excitement of the hunt. Prices started around 5000 euro and reached up to the stratosphere, but perhaps those not burdened by having to decide what to buy and what to leave behind enjoyed the shows at least as much as the collectors.

Now the great hall is empty and Paris is back to la deprime.  Other countries use more scientific-sounding, distancing terms for what France and most of Europe, and the whole world, is suffering from: recession, depression,  stagnation.  Here the word heard everywhere is unabashedly personal.  It describes a mood, a total state of affect.  C’est la deprime: France has got the blues — big-time.

The mood in numbers?  Unemployment up over 10 percent.  Youth unemployment, twenty five percent.  Both theft and hate crimes on the rise.  The approval rating of President Hollande has plummeted to an unprecedented 36 percent (and to add more deprime, the public detests his girlfriend.)  To hold down interest rates on the galloping national debt, all manner of taxes have been jacked (up to 75% on income) squeezing business and competitiveness.  More taxes are on the menu.   Brains and capital are moving across the borders to Belgium, Switzerland, London and, not least, New York.  The self-exiles and those debating flight call themselves ‘the Pigeons.’  Their newly published website gathered 14,000 members in a few days.   PS politicians and left-leaning journalists label them traitors and there are calls for anyone who moves out to be stripped of citizenship.  More deprime.

But Not Everyone is Hurting

35,000 euro for a Robert Crumb, 1,250,000 for a David Hockney?   Sample asking prices for the ‘sure values.’   The actual sales results are trade secrets, but according to some top gallerists, this year’s FIAC receipts were on the lusty side, boosted by the government’s 11th hour pullback on the threat of a wealth tax on works of art.   Champagne corks popped in the VIP section of the Grand Palais.  Even if they’re numb to Crumb, at this point where else can the very well-heeled invest?

Of course, one could just blow the dough before it’s taxed to shreds.  Last Monday, billionaire investment banker Edouard Carmignac paid a rumored 4 or 5 million and indulged his inner teenager by throwing an intimate Rolling Stones reunion concert for 900 friends and clients at Theatre Mogador.  So cozy, so just-our-crowd.  No grubby kids.  Money and art: such an odd and inseparable couple.